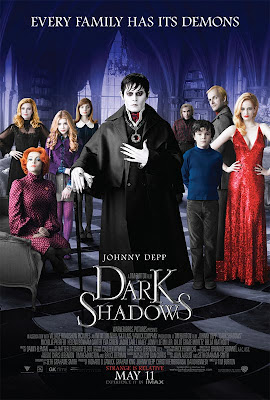 The combination of Tim Burton and Johnny Depp is never predictable and always quirky and interesting. “Dark Shadows“ is no different. As “Sweeney Todd: The Demon Barbed of Fleet Street“, “Edward Siccorhands“, “Charlie and the Chocolate Factory“ etc – every single one of them is from out of this world and has a new and kind of peculiar angle on things. Plus it’s nice that Helena Bonham Carter (Burton’s wife) is usually co-starring Depp. She’s so freaking awesome and amazingly talented.

“Dark Shadows“ is a story about a landlord who thinks there’s a curse on his family (well, there is, actually) and after marrying the love of his life, a former lover Angelique sends his lovely wife to death. Turns out the former lover is a witch who curses Depp’s character to spend the eternity as a bloody vampire and gets him buried in a coffin for almost 200 years. By an accident he’s discovered by a bunch of humans and Barnabas returns to his home (a freaking castle). As it turns out, his descendants are living there, but unfortunately the family business started by Barnabas and his father two centuries ago is not doing so well now. Suprisingly, it’s Angelique’s fault. A war is about to go down between these to eternal creatures.

There are multiple layered characters and everyone of them has their own problems to deal with.  They're all broken on some level. The world Burton has created is absolutely wonderful, peculiar, interesting and at times, yes, scary. The actors are great. It isn’t an Oscar-worthy movie, nor are the performances, but it’s capturing and easy to follow.

What bothered me was that it didn’t have a culmination or anthing. I kept waiting for this big culmination but none of that ever came. Yeah, there was a battle between Angelique and Barnabas, but it wasn’t that big or badass. That was probably the only thing I didn’t like. It wasn’t the best work these two have done, but it was still good and different. There are too many films that are so similar to each other that it’s refreshing to see something new and interesting.
Posted by Siiri at 2:45 PM