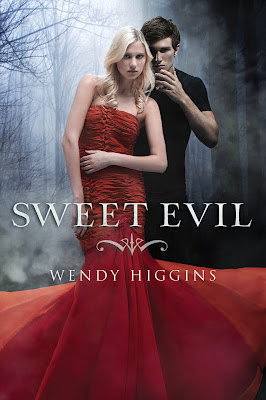 Embrace the Forbidden
What if there were teens whose lives literally depended on being bad influences?
This is the reality for sons and daughters of fallen angels.
Tenderhearted Southern girl Anna Whitt was born with the sixth sense to see and feel emotions of other people. She’s aware of a struggle within herself, an inexplicable pull toward danger, but Anna, the ultimate good girl, has always had the advantage of her angel side to balance the darkness within. It isn’t until she turns sixteen and meets the alluring Kaidan Rowe that she discovers her terrifying heritage and her willpower is put to the test. He’s the boy your daddy warned you about. If only someone had warned Anna.
Forced to face her destiny, will Anna embrace her halo or her horns?

“Sweet Evil“ is a debut novel from Wendy Higgins. I found it via goodreads and thought it had a beautiful cover + the description sounded intriguing. I gave it a try and I’m glad I did. It was a great, quick, emotional, fun and a quite dark read.

There were some very fun and interesting characters. We have:

So that’s it with the characters. I also liked the storyline. Anna can see auras which reflect people’s emotions. When she becomes 16, she’ll see their guardian angels too. Anna doesn’t know about her heritage until her 16th birthday when her stepmother explains some of the story, but she doesn’t have the whole story for her. Anna meets Kaidan and Kai offers to take her on a roadtrip to the City of Angels (Los Angeles) to see her father (who’s in jail, by the way) and Sister Ruth – supposedly she’s got some information to share, too.

It’s a dangerous trip and the answers they get are even more terrifying than everything Anna’s ever imagined. She has to take a front row seat in the battle between Heaven and Hell and it’s hard to resist temptation when you’re a descendant of the Duke of Substance Abuse and you’re drawn to alcohol, drugs etc. Also, you find yourself in love with the descendant of the Duke of Lust. Oh, what’s more, he’s hot and cold. Like all the time.  You don’t know who to trust. You have a pure heart, but you’re expected to work for Hell in order to survive. It’s a very dangerous game Anna’s playing and there seem to be no winner in this one.

I was bothered by Anna’s crying all the time, because it got tiring at the end, but I guess she’s the way she is due to the environment she grew up in (which isn’t that bad at all, but Patti’s emotional, they have to make ends meet and have sacrificed a lot), plus her father has a soft spot, too. Also, I found it funny that Patti let Anna go on a roadtrip with Kaidan when she knew he was a demon and she’d known him for like 20 minutes or so, but eh, whatever, I guess it was necessary for the storyline.

I liked the idea of the Dukes of Hell and their descendants – the Nephilim. I found the Dukes captivating, because they honestly think they're better than good forcesa and they won't stop at nothing in order to get what they want. I also liked the characters, the plotline and I relly enjoyed that everything too time. It wasn’t like it often happens that it’s two-three weeks while everything goes from bad to worse, it took what? 8 months? Anyway, it was great that it took longer for the story to develope.

On the love triangle: I thought Anna and Kaiden had tons of chemistry, but Kopano’s just somekind of a fireescape for Anna, whether there should be a fire and she needed one, and I did not feel their chemistry at all. In my opinion, they’re better off as friends.

I was literally devastated by the ending and I want to read the sequel (no news on that one yet) so bad already. It was an intriguing story with some cool characters and creative writing. I very much enjoyed it.