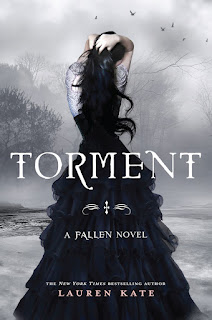 Hell on earth.
That’s what it’s like for Luce to be apart from her fallen angel boyfriend, Daniel.
It took them an eternity to find one another, but now he has told her he must go away. Just long enough to hunt down the Outcasts—immortals who want to kill Luce. Daniel hides Luce at Shoreline, a school on the rocky California coast with unusually gifted students: Nephilim, the offspring of fallen angels and humans.
At Shoreline, Luce learns what the Shadows are, and how she can use them as windows to her previous lives. Yet the more Luce learns, the more she suspects that Daniel hasn’t told her everything. He’s hiding something—something dangerous.
What if Daniel’s version of the past isn’t actually true? What if Luce is really meant to be with someone else?

Okay, here’s a good reason why I should write my reviews as soon as possible: I don’t remember much about the book afterwards. Hell, I know I wasn’t that impressed with this book and it lacked a bit of everything for me: the romance wasn’t quite there; there was a stupid love triangle (which in my opinion was just hilarious); the protagonist was a whiny little thing with her head in the clouds and she did not think clearly about anything; the action, mystery, build-up – everything was lacking. But it wasn’t a complete disaster, was it?

I like Daniel, I like Cam and I like Arriane. I even like Luce. Well, sometimes. In this book (and for god’s sake, in the third one) she became extremely annoying – everything Daniel was trying to protect her from, everything he asked her to do in order for her to be safe – she threw everything out of the window and acted like a child. She wants to be included in the decision making process, but she cannot make any good decisions on her own. She want’s to be treated like an adult while she’s clearly not. She’s all over the place.

In this book, Luce was forced to go and take up classes in another school while Daniel was out in the world trying to protect her and find out a way to save everyone. She was really upset about that. What was good about this whole situation was that there were other Nephilim and angels with her so she didn’t have to be alone. What’s more, she got the chance to study things she actually needs in order to stay alive in this whole mess. Luce discovered the Announcers and, therefore, did some research on her own by which she was just digging her own grave, if you ask me.

Daniel was forced to team up with Cam and he was forced to stay out of Luce’s way. He couldn’t resist sneaking in to the school territory to see and speak to her, but mostly he stayed away. That left the door open for another guy – Miles – who was starting to have feelings for Luce. During this whole mess, Luce found herself having doubts about her relationship with Daniel and their destiny to be together. It felt like everything was about to come crashing down.

It wasn’t the worst book in this series, but it wasn’t that great compared to the first one, mainly because of Luce and her irrational behavior. There were some one-liners that cracked me up and it wasn’t that boring, I guess it was just a bit too childish for my taste.

“People like me. I’m a Nephilim. N-E-P-H-I-L-I-M. That means anything with angel in its DNA. Mortals, immortals, transeternals. We try not to discriminate.“
“Shouldn’t the singular be, you know, nephil, like cherub from cherubium and seraph from seraphim?“
“Seriously? Would you want to be called a nephil?“

“I don’t want you to be anyone other than who you are.“

“Make those Announcers your bitches. You know you want to.“

“Save it. You can put it on the fist sandwich I’m about to serve you.“