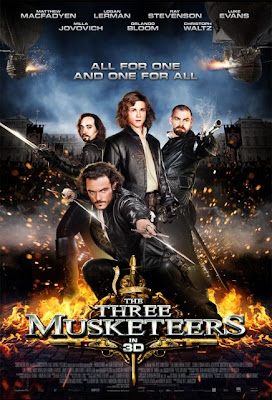 I’ve wanted to see "The Three Musketeers" for so long and now that I’ve seen it I can say that it was a hell of a lot fun. Yeah, it’s adjusted to our generation and to the 21st century, but it still has some sort of a timeless edge to it and it was, honestly, a lot of fun to watch. It wasn't original or anything like the books, but I guess the thing is that there're different elements to each era and this is the era of action-packed and witty-dialogued movies. At times it felt like I've seen this thing a thousand times already, but it was still enjoyable.

I’m pretty sure I liked all the portrayings of the main characters. I liked Athos, Porthos and Aramis. I thought that Logan Lerman did a wonderful job as a young D’Artagnan (you could see that he's still green compared to the other, more experienced actors, but he tried his best and did a good job) and he had some of the most hilarious dialogues in this movie. I’ve never thought much of Milla Jovovich, mostly because of this “Resident Evil“ thing (I’ve never enjoyed this kind of movies, to be honest), but I really liked her as Milady de Winter. Also, I thought Freddie Fox as King Louis XIII was freaking hilarious.

Furthermore, Orlando Bloom as a villain? Even in my wildest dreams I did not expect him to pull trought. Yeah, he wasn’t perfect and it was pretty awkward at times, but it was still something new and interesting from him. Liked his accent as always, although, it was a little different in this movie. However, Cristoph Waltz as a villain was more believable and I liked him better as a one.

Since I didn’t see it at a movie theatre, I cannot say anything about the 3D effects, but I bet they were pretty pointless. Well, they usually are.

Anyway, I thought the story was great, most of the action scenes were enjoyable and the dialogue was pretty funny. It wasn’t anything spectacular or original, but it was still very enjoyable and fun. I really liked this movie and I’d gladly watch it again sometime.
Posted by Siiri at 6:30 PM