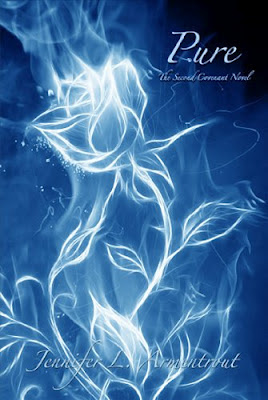 There is need. And then there is Fate...

Being destined to become some kind of supernatural electrical outlet isn't exactly awesome – especially when Alexandria's "other half" is everywhere she goes. Seth's in her training room, outside her classes, and keeps showing up in her bedroom – so not cool. Their connection does have some benefits, like staving off her nightmares of the tragic showdown with her mother, but it has no effect on what Alex feels for the forbidden, pure-blooded Aiden. Or what he will do – and sacrifice – for her.

When daimons infiltrate the Covenants and attack students, the gods send furies – lesser gods determined to eradicate any threat to the Covenants and to the gods, and that includes the Apollyon... and Alex. And if that and hordes of aether-sucking monsters didn't blow bad enough, a mysterious threat seems willing to do anything to neutralize Seth, even if that means forcing Alex into servitude... or killing her.

When the gods are involved, some decisions can never, ever be undone.


Jennifer L. Armentrout’s second novel of the Covenant series is called “Pure“. In my “Half-Blood“ review I stated that it’s very similar to R. Mead’s Vampire Academy series and there were some elements similar to VA in this book, too, but as it progressed, it got more and more original, which, in my opinion, is absolutely fantastic!

In this book, the author concentrates more on telling the story of the pures and their place on the pedestal of the society. In an ideal society halfs and pures should be equals, but for now, it sure doesn’t feel like it and halfs are somewhat frowned upon and looked down on. I think this title represents the part of the society that is „pure“ and, also, pure love as in the sacrifice Aiden makes at the end of this book.

Alex must get used to the idea of her new destiny, but it’s hard when everyone around you at school treats you badly and thinks you’re a feverent supporter of daimons. Also, they blame you for the massacre commited by your mother and think you knew about it, but did not report it. Alex’s having nightmares about her mom and her followers. Moreover, she must commit herself to school, training with Aiden and training with Seth. She’s exhausted inside out. After finishing about one third of the book, something tragical happened for Alex and I must admit, I couldn’t keep my emotions or tears together.

In addition to her life in school, she must go and give her statement in front of the Council, where she is asked about the events that took place in Gatlinburg. What she doesn’t know is that the questions are not only asked in order to alanyse what happened in Gatlinburg, but also because some people think that Alex’s supposed to be in servitude until the end of her life and, therefore, she cannot commit herself to her new deistiny, therefore, they try to make her look guilty and sentence her into servitude.

I’m curious about why Alex hates Lucian so much, because he doesn’t seem that sleeky and bad as Alex seems to think, but maybe I’m just too blind to see it or want to see the best in people. I'll probably start to dislike him as the series progresses, tho.

On the lovetriangle (Alex-Aiden-Seth): Aiden’s pushing Alex away and leaves her alone when she needs him the most, but there’s still someone who supports her in every situation and helps her make it trough this whole mess – Seth. Trough a rough start with picking on each other during every single moment they share with oneanother, they start a friendship and you can easily see their chemistry as opposed to Aiden and Alex – their chemistry is not that obvious to an eye of another human being, because it's more on the inside than outside (although they're attracted to each other's looks, too). You can see Seth falling for her and she’s starting to think more of him than just a tough and hansome egomaniac. There’s only one problem: even though Aiden constantly pushes Alex away, there’re moments where he says something he shouldn’t. I was a feverent supporter of team Aiden, but after how he treated her (yeah, yeah for their own safety etc) and Seth was there trough every step of the way, I kind of fell for Seth. Now I’m torned. The sacrifice at the end of the book doesn’t make everythink okay, but it made it clear that Aiden loves her, although he shouldn’t. I’m sure that Alex, as Rose from VA, ends up with her true love in the end.

I liked Laadan from the new characters, but I think there was something fishy between her and Rachelle while she was still alive and I think there’s something up with this servant who Alex tried to talk to. I bet there’ll be some furies in the next book and I’m personally looking forward to meeting some of the gods who're supposedly walking among the humans. I’d like to know what they have to say to Alex and what they all think about this whole situation. Also, I liked the balls scene, pool scene,  drugged Alex, Seth, the ending of the book, Caleb, Alex’s suprise for Aiden and vice versa. I also liked that there seem to be some changes in the atmosphere of the society and I think it’ll be something to explore in the next ones.

My book included the first chapter of “Deity“ (Covenant #3), the e-book version had the pool scene from Seth’s POV (here’s the short version of it) which is quite interesting and different. I definitely want to read the next one which comes out in the fall, 2012. The more I read this series, the better it gets, hopefully the next one will be even more original, intense and entertaining. By the way, Armentrout recently announced that the series will have a fifth book as well, also, there’s a prequel “Daimon“ and a novella called “Elixir“ from Aidens POV will be published this year, too (by the way, these two are free for download on Spencer Hill's webpage).

“Ever since I’ve met you, I’ve wanted to break every rule. You'll become the center of someone's world one day. And he'll be the luckiest son of a bitch on this earth.”

“It’s not great. What kind of connection is this? A one-way hotline to Pervyville?” I took a step forward, on a roll now.
“It’s disgusting. Freaky—stop laughing, Seth!”
Reading order:
“Daimon“ (prequel)
“Elixir“ (Aiden's POV, November, 2012)
Posted by Siiri at 9:15 PM